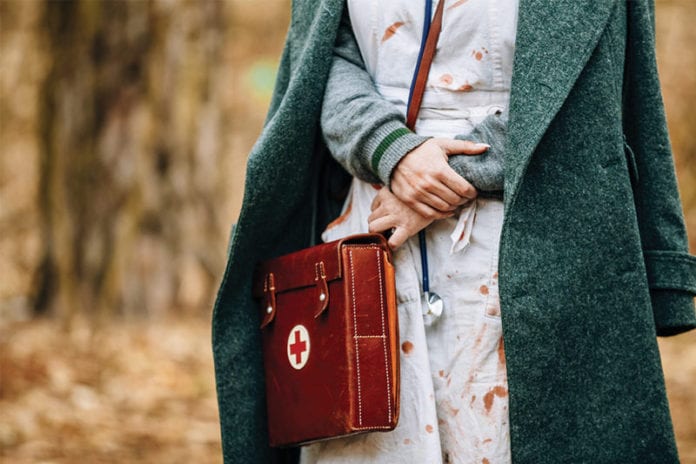 Ah, the portrait of a nurse. The freshly starched dress, that sharp little hat (oh, that hat!), the coveted pin; remnants of an era long forgotten.

Or are they? Just a few decades back, nurses were required to wear this cap. They had no choice but to button up that pinafore apron every day. And for what? Certainly not for sterilization, though that may have been the intent back then. Now we know better.

Join us as we remember the uniforms of decades past — and smile, because we’ll never force you to wear these outfits again. Ever. Unless you want to, of course.

To the left is an 1856 lithograph of the hospital ward at Scutari where Florence Nightingale worked (via Wikipedia).

In 1854, Florence Nightingale served during the Crimean War (one of the bloodiest wars in history), along with a staff of 38 volunteer nurses.

It was not until after the war that she discovered and advocated that sanitary living conditions were of great importance.

There was not yet a nursing uniform, but instead a full-length dress similar to that of a nun.

The nursing uniforms of the late 1800s were modeled after a nun’s habit (as pictured on the left). They were worn in order to properly identify nurses, and to provide a full-length, “fever-proof” shield to protect the visiting nurse from infection. You’ll notice, however, that although the gown covers most of the body, the nurse is not wearing gloves or a mask.

Although Florence Nightingale’s work served as an inspiration for nurses in the American Civil War, her teachings on sanitation were not convincing to her colleagues at the time.

Nurses continued to wear the long “fever-proof” gowns, with hats that served little purpose beyond identification. No gloves or masks were worn.

Pictured on the right is Lillian Wald, a nurse, social worker, and public health official in the late 1800s to early 1900s.

First nurses at Sternberg Hospital, Chickamauga Park, Georgia, August 1898. Again, no masks or gloves, but the same full-length gown and apron to protect against infection, plus a new form of identification: the arm cuff with a large red cross.

In 1908, the Navy Nurse Corps was formed. Below is a photo of the first 20 Navy nurses to ever serve the United States.

As we can see on the left, the British nursing uniforms of the early 1900s were very, very similar to the ones seen in America at the time.

If we take a look around the world at this time, almost all nursing uniforms were the same: the long gown to protect from infection, the apron for the same reason, and some type of hat or armband to identify oneself as a nurse.

Finnish nurses in 1918 (below) had a similar uniform, but favored the more nun-like, long head covering.

World War I changed the way that wars were fought — technology had advanced to the point where long range weapons were possible. Unfortunately, medical technology did not advance at the same speed, meaning a great many more injuries, infections, casualties, and the need for more trained nurses. As a result, a nationwide recruiting effort began.

Since many of America’s nurses were serving in World War I, student nurses were left caring for thousands of flu-ridden people. Many of these young women died while tending to the sick.

At this time, an American surgeon named William Halsted was falling in love with head OR nurse and wife-to-be Caroline Hampton, who developed dermatitis from the harsh chemicals used to disinfect hands for surgery. Because of her discomfort, Halsted developed the first pair of latex gloves. He later went on to create surgical gowns and hats, too.

Many nurses began using gauze masks and gloves, and the spread of infection decreased.

Pictured below is the 1919 graduating class of the Massachusetts General Hospital that fought the Influenza Pandemic.

Here, an article (via Deedy.com) details the work of the student nurses:

Eighty young women, constituting the “Victory” class of the Massachusetts General Hospital, after completing the hardest year of continuous hard nursing that has ever been done by pupil nurses in the history of the institution, were graduated last night.
Dr. Henry P. Walcott, chairman of the board of trustees, who presided at the exercises and announced the graduates, declared that each individual member of the class had done as high a service and incurred as grave a danger as any nurse or soldier in service abroad.
800 CASES OF FLUIE
The members of the class have in the past year nursed over 800 cases of influenza which came in two great waves. Over half of the class were seriously ill with the disease; and all, because of the severe tax which overwork placed upon them, were made dangerously susceptible. One of their number died. A scarlet fever epidemic placed 36 of the girls on the dangerous list, but all survived.
“There are no words,” said Dr. Henry Van Dyke, who made the address of the evening, “that can fittingly commend the part that women, and especially nurses, have played in the winning of the war. The type of service that did not flinch even before an enemy that chose as its favorite target that Red Cross on the roof of a hospital, can never be given its just reward in rhetoric.”

More than 59,000 American nurses served in the Army Nurse Corps during World War II. Nurses worked closer to the front lines than they ever had before. They served under fire in field and evacuation hospitals, on trains and ships, and as flight nurses on medical transport planes. The skill and dedication of these nurses contributed to the extremely low post-injury mortality rate among American military forces in every facet of the war. Overall, less than four percent of the American soldiers who received medical care in the field or underwent evacuation died from wounds or disease — a huge improvement from the previous world war.

Starting in 1950 and moving through the 1960s, the intensive care unit was developed, leading to nursing specializations — meaning more autonomy for nurses.

The big development in the ’60s was the nurse practitioner movement. Nurses were becoming more independent and more educated, which was a sharp contrast to how they were portrayed in the media.

As you can see to the right, nurses were viewed as little more than the “help” (almost like back in the early 1900s, when they were little more than servants) looking to ensnare a rich doctor to take care of them.

Nurses were highly sexualized by the media — even Barbie had a nurse’s outfit! Her peeptoe heels and cat-eye glasses did nothing to further the respectability of the profession.

Around the ‘70s and ’80s, a major cultural shift in nursing took place — today’s scrubs with pants started to replace the impractical dresses. Now, nurses, aides and doctors are only differentiated by accessories and name tags.

We’ve come a long way from “fever-shields” and now know that scrubs and proper hygiene prevent the spread of infectious diseases.

Quite an evolution! Share your thoughts in the comments section below.

I graduated nursing school in 1975 (42 years already ?!!). My first job was Orthopedics. My cap was constantly getting stuck on over the bed apparatus (traction, etc.). I finally stopped wearing my cap when I went to night shift.
Yes, I missed wearing it; but, I still have it. I had it preserved (like a wedding dress). It’s still white and looks brand new in its package.

I wore pants uniforms from the time I became an Occupational Health Nurse Specialty at a very large manufacturing Fortune 50 company. We had our own Life Squad and responded all over the buildings on the 40 acre site.
Because we might have to climb a ladder , or go done into a small space to attend to an injured worker, it was mandatory that we wear only pants uniforms. I wore my cap for awhile there, but eventually gave it up.It wasn’t mandatory and it got in the way in too many situations

I graduated in 1966. I also miss the distinction of nurses attire but not the starch. The 70’s and 80’s were known for the unisex movement and it spilled over into medicine. Scrubs became the norm which i never could become accustomed. Some look like clowns outfits and unless you work on Peds, seem demeaning to the profession. Not sure what accessories differentiate the job descriptions. What I do know to be true is that patients are confused by the sameness of the appearance of staff. The new name tags which highlight “RN”or “LPN” do help patients know that the… Read more »

I graduated in 1967, and to this day (I am one of only a few) that misses my cap. If a name badge is turned backwards, the patient has no idea of who is a nurse, aide (old term I know), housekeeping, etc. We do not always think of the patient and how they see us.

Our hospital washed and starched our uniforms for us. They usually had so much starch that they made noise when you walked. I worked the Children’s Building and stopped as the kids walked by. A small boy with a big grin on his face grabbed my pocket. Instantly I had no uniform on! I was standing in a white slip and my uniform was in pieces on the floor. The boy was shocked and he could not stop laughing! I wore 2 large blue Johnnys for the rest of my shift. I had lots of friends that just happen to… Read more »

I graduated from nursing in 1983 with my AS degree. We wore the nursing hats with the wings and when you graduated you received the black stripe across the top.
We wore dresses with the pinafore, white hose and white shoes. Back there were more LPN’s than RN and so I was the charge nurse at night on a 45 bed medsurg Unit at Florida Hospital in Orlando Florida. Being the youngest nurse there I would ask the LPN’s (who were 30 years in the field their advice!

I last wore my RN cap in 1984 as a Navy RN – I always got hung up in the cables for traction in the Ortho ward!!! I looked like an over-sized marionette!

I graduated from the Sacred Heart Hospital School of Nursing in 1959. We wore the starched uniforms, and caps that were prevalent in the late 50’s. We wore uniforms until 1967, and the advance of the ICU/CCU’s. Then we were finally allowed to wear pants as part of our uniform. I went to the University of Maryland Nurse Practitioner program in 1977, graduated in 1979, and never looked back. I now wear scrubs and a lab coat while I am working – and I do still work part time at age 77! This is a wonderful time for nursing, and… Read more »