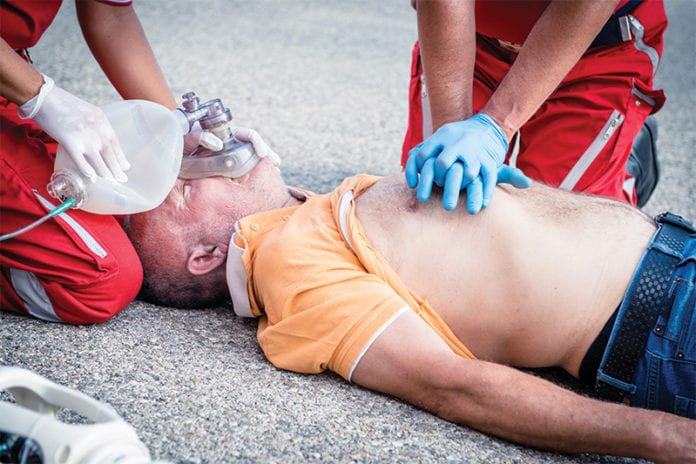 A new case study reports that a man undergoing cardiopulmonary resuscitation exhibiting signs of conscious awareness for 90 minutes before the medical team stopped the life-sustaining procedure.

According to the report, the 69-year-old man was admitted to a hospital in Denmark in 2016 after three days of indigestion and nausea. Shortly after arriving, he became unconscious and went into cardiac arrest, according to Dr. Rune Sarauw Lundsgaard, an anesthesiologist at Herlev Hospital in Copenhagen and an attending physician on the case.

"At this time, paramedics were still in the room, and CPR was initiated immediately. Due to a recent event with another patient, the cardiac arrest team was in the next room, and advanced CPR was initiated shortly after. This means that two paramedics and four hospital porters were shifting in pairs of two at performing the CPR," Lundsgaard explained.

"The patient had no electrical activity in the heart at any time. The heart only functioned because of the manual compressions," he added.

The team of six continued advanced CPR on the patient for nearly 90 minutes. During this period, the patient would occasionally show signs of conscious awareness, according to Lundsgaard.

"As soon as CPR was initiated, the patient opened his eyes. When CPR was performed, the patient was able to respond to verbal communication by moving eyes, lifting hands and legs and nodding his head. The patient's wife was present and able to hold his hand," Lundsgaard said.

Though rare, awareness during CPR may be more common than many people think.

In a 2014 study, 2% of cardiac arrest survivors could explicitly recall "seeing" or "hearing" actual events related to their resuscitation.

About 10% also recalled having "near-death experiences" characterized by a variety of sensations such as detachment from one's body, feelings of levitation, warmth and the presence of a light, according to the study.

In this case, the patient's heart never exhibited any spontaneous rhythm and did not appear to move during multiple ultrasound evaluations. Consequently, a surgical intervention was not recommended, according to Lundsgaard.

"Several thoracic surgeons at different hospitals were consulted and they all agreed that the prognosis for an operation was very poor," he said.

About one hour into the episode, an ultrasound scan of the heart also showed an aortic dissection, a potentially lethal condition in which blood is forced between the inner and outer layers of the aorta, Lundsgaard said.

The dissection probably contributed to the original cardiac arrest, according to Parnia.

The team performed CPR on the patient for 90 minutes -- much longer than normal, according to Parnia.

"Most hospitals will stop at around 20 minutes. However, based on results of studies, it is recommended to continue for at least 45 minutes. This is unusual," he said.

However, the team was ultimately unable to save the patient's life.

"The cardiac arrest team in our case was very affected by the situation," Lundsgaard said. "For me, having to tell the patient that we were unable to save his life ... and that in a minute we will stop chest compressions and you will not survive was a challenging situation."

The experience also raised some difficult ethical questions for the medical personnel -- including the issue of sedating patients during resuscitation, Lundsgaard said.

"The question of sedation during CPR is not new, but sedation is not routinely performed during CPR," Lundsgaard said. "This is an area that needs further research."

And for those who survive such incidents, the long-term effects on mental well-being are unknown.

"We know from anesthesia that accidental awareness during operations often lead to post-traumatic distress and decreased quality of life. One might suspect that awareness during CPR may be just as stressful," Lundsgaard said.

Once the patient became aware and responsive, it seems that CPR should have bee stopped. The patient was probably scared because he didn’t know what was going on. Sometimes we may perceive something that is not helping. CPR does save lives.

The patient doesn’t care anymore. The mental trauma for the providers lives on/

Same thing happened to my patient in a S.Ca ED in the 1990’s. We had a” thumper” (I think thats what we called an automatic chest compressor ) I remember the ER Physician’s frustration when she said” does anybody have a heart for transplant ” We knew we could not save him. When the compressions were effective he would open his eyes and he appeared to be focused on his surroundings but looked puzzled. When our compressions were ineffective he would lose consciousness again…..

Just because this man had sporadic moments of awareness does NOT mean he was “awake for 90 minutes.” Also, a good rule of thumb is if you think a patient needs sedation for CPR then you should probably STOP CPR BECAUSE THE PT IS ALIVE and DOES NOT NEED IT. Also, why did this team continue doing chest compressions if they found the root cause to be dissection 60 minutes into resuscitation? Given this man was not a surgical candidate – and knowing that aortic dissections are life threatening ESPECIALLY with other comorbidities – then this poor guy should not… Read more »

Wow! Never had this happen in 42 years of experience. Interesting about the aortic dissection. Was there any mention of autopsy? What was his state of health prior to this incident? Diabetic, Margan’sSymdrome? Just curious. Thanks

They did all they could. Jo Ann NP