Nurses on the Front Lines: When Patients Attack 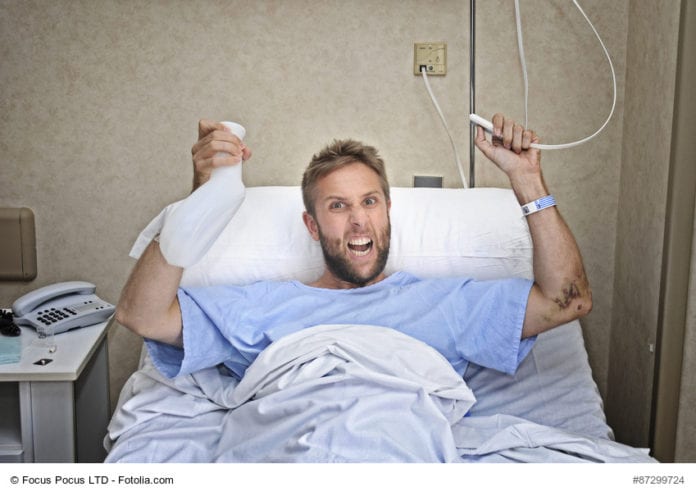 All nurses have stories to tell about “problem” patients. Usually, these stories are funny rather than scary. There’s one patient who finds ridiculous things to complain about. Another wanders the halls singing show tunes.

But some patients pose a danger to themselves, other patients and the nurses charged with caring for them. Here, we look at some of these tales from brave nurses who have met the challenges posed by violent patients and answered the question “What is it like to be attacked by a patient?”

- Which Patients Are Most Likely to Attack?

In our informal survey, the patients most frequently reported as violent were also among the most vulnerable. Almost all were suffering from dementia, psychosis, PTSD or traumatic brain injury.

Elderly dementia patients are especially likely to lash out. Nurse Kathleen David-Cote’s story is a common example of how quickly things can go wrong: “I had a dementia patient grab my name badge lanyard and try to strangle me with it. When I ducked my head out of the necklace, she took her fingernails and scratched my arm, making it bleed. Very frightening. Her eyes were so scary.”

Bonnie Holman Erwin says she has been attacked many times. “I worked in an Alzheimer’s unit in a geriatric facility…don’t ever believe that feeble old people aren’t strong! You definitely need to be alert, quick and, most important, understanding of their condition.”

Psychiatric instability can also make patients, even young children, act out aggressively. Sometimes, nurses endure many non-life-threatening acts of anger in a single shift. Nurse Kim Ostrander Crum gives this account of what it’s like for her: “I work in a children’s psychiatric facility. I’m attacked routinely—trash can thrown at my head, punched, kicked, bitten, spit on and (my particular favorite) breasts pinched. That was all in one day.”

PTSD is another condition that can make an otherwise peaceful patient suddenly dangerous. Gina VaVerka tells this story about a patient who was a veteran: “I am an army nurse and I was working on a telemetry unit in an army hospital in Texas. My patient started screaming in the middle of the night and thrashing around the bed. I went to see what was going on. As I leaned over the bed, he grabbed onto my stethoscope and scrub top and started choking me with it. My coworkers had to pry us apart. Turned out he was having a full-blown PTSD attack from the war in Iraq. It looked like he was wide awake and looking at me. Apparently he saw me as someone completely different.”

- How Should You Respond to an Attack?

If you are attacked by a patient, there are always legal repercussions to consider. Melissa Thomas Goodson makes this astute observation: “I work on an Alzheimer’s unit. Being attacked by a patient is not uncommon. It just takes teamwork and trusting your staff to keep an ear out for trouble. What bothers me most is that while being attacked, if you aren’t careful and the resident bruises himself while beating on you, you’d better be able to explain how he got that bruise or the facility will accuse you of abuse.”

That doesn’t mean you aren’t allowed to defend yourself. Jahna Dyer tells the most important lessons she learned after a life-threatening attack: “Always leave yourself an out, and never forget that you are human, too. The patient is important, but so is the nurse.”

Being trained and prepared to defend yourself appropriately is always a good idea. Nurse Betty Reckling recounts how she escaped a tight situation: “I recently had a patient trap me in a room and threaten to break my arm, on which he had a very firm grip. Fortunately, I had nonviolent defensive training in a former job and was able to use this to get out of his grip and get out of the room!”

- How Do Nurses Feel After an Attack?

Some nurses are rattled enough to seek out a different assignment after being attacked by a patient. Others find ways to shrug it off (but they never forget the experience). Laughter is sometimes the best coping mechanism in situations where no one was hurt. Nurse Angie Maxwell Pemberton tells her story about getting attacked as more humorous than frightening: “I had a little lady with dementia beat me over the head with her catheter that came apart…urine flying everywhere. Coworkers were laughing so hard and dodging urine to stop her.”

Whatever the outcome, sudden acts of violence do leave their mark. Nora Breuer points out that everyone who witnesses an attack is impacted: “As a psychiatric nurse, I have had it happen to me several times. It’s very frightening for everyone, including the other patients.”

One thing that most nurses have in common is compassion for their attacker. They understand that patients who assault nursing staff are usually acting out of fear and disorientation rather than any desire to cause harm. In fact, many of the patients mentioned above later apologized profusely when they were calmer and realized what they had done.

Do you have any “war stories” to tell from your life as a nurse? What’s your advice for dealing with dangerous situations? Let us know in the comments section.

QUIZ: Test Your Knowledge About Antibiotics

Try your hand at this quiz. Read each question and then click the button to the right of the answer you think is correct. 1....
Read more
Fashion

The 10 Best Hairstyles For Nurses

Nurses have plenty of things to worry about at work…and your hair should not be one of them! With that in mind, we hunted down...
Read more
Lifestyle

Spring Cleaning For Nurses : How To Get Organized

Taming the tote bag? Corralling the car crud? Paring down the pockets? Does organization sometimes seem like the Holy Grail of life? The always...
Read more