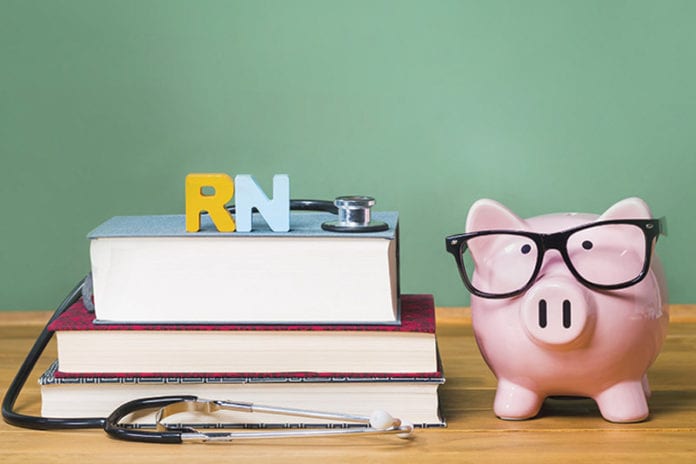 With tuition costs rising throughout the country, graduate nurses, and Millennials in general, are entering the workforce with more debt than ever before. In fact, according to this study by the Brookings Institution, a nonprofit public-policy organization based in Washington DC, the average student-loan debt increased by more than 60 percent from 2002 to 2012. During the same time period, the number of student loans also increased by 77 percent. Unfortunately, that study isn’t the only one that paints a bleak picture of Millennials’ personal finances.Another study, which was conducted by the George Washington Global Financial Literacy Excellence Center (GFLEC) and PwC US, surveyed more than 5,500 people between the ages of 23 and 35. Their research unveiled the following frightening statistics on Millennials:

54% worry that they cannot repay their student loans

As student loans increase in both number and volume, Millennials are faced with greater challenges concerning debt repayment. These challenges weigh heavy on many of those who took part in the survey, with 54 percent voicing their concerns about their ability to repay their student loans.

Basic financial knowledge, including knowledge of principles like inflation and compound interest, is severely lacking among Millennials. As a result, Millennials are more likely to make poor financial decisions and less likely to resolve financial issues effectively.

Saving certainly isn’t one of most Millennials’ strong suits. When asked if they could come up with $2,000 within the next month, 50 percent of respondents reported that they couldn’t. Additionally, 30 percent reported overdrawing on their checking accounts, and 53 percent claimed to carry a credit-card balance in the last year.

34% are unhappy with their current financial situation

Considering how dismal the majority of the statistics in the study were, it’s really no surprise that 34 percent of Millennials are unhappy with their finances. In fact, it’s actually a bit surprising that this figure isn’t higher. Regardless, a large percentage of those surveyed reported low levels of satisfaction with their finances, and many felt that they lack the tools needed to improve their situation.

Without any in-depth studies on the financial habits of Millennials in the nursing profession, it’s hard to compare their debt issues with those of other millennial college graduates. However, unlike many college graduates, nurses don’t typically struggle when it comes to finding jobs with decent pay in their chosen career. While the demand for RNs is not as great as it was a few years ago, the profession is still far from being oversaturated. In fact, according to the Bureau of Labor Statistics’ page on nursing, employment in the nursing field is expected to grow much faster than the average career between 2014 and 2024. For these reasons, we’d wager that debt among the millennial nursing population is lower and less burdensome than it is for the millennial population as a whole.

How to Deal with Debt as a Nurse?

The best way to handle debt as a nurse is to simply avoid it in the first place. With the number of scholarships and reasonably priced nursing programs available in the United States, it’s not usually necessary for nursing students to take out large loans to fund their education. If you’re still a student and looking to keep your educational expenses at a minimum, be sure to take advantage of as many scholarship opportunities as you can. Also, consider completing an ADN program at a local community college, where tuition is reasonable, and then completing an RN-to-BSN program at a university once you have your license.

If you’ve already graduated and you’re a bit over your head in debt, there’s no need to panic. Loan-repayment plans are available in various situations, especially to nurses who are willing to earn a commission in the Public Health Service or in a branch of the armed forces. If you’re not interested in making that type of commitment, you should know that the NURSE Corps Loan Repayment Program allows nurses to work in eligible public and private facilities and pays off 60 percent of participants’ remaining student debt.

Do you have any other debt-reduction strategies for your fellow nurses? If so, be sure to share them in the comments below!