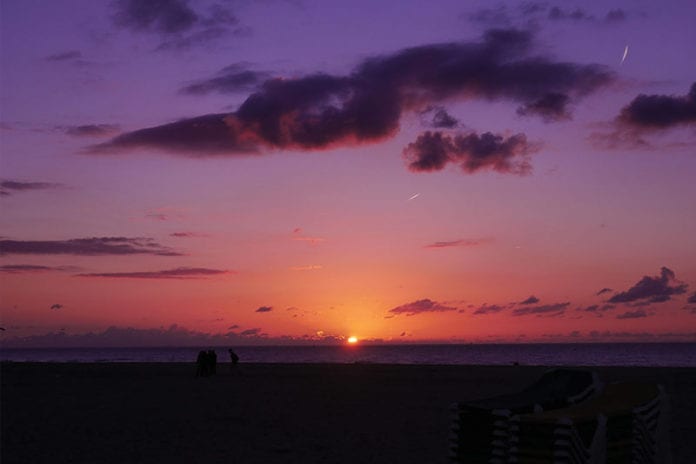 This story caught our eye as an example of nurses going above and beyond, and in this case around hospital rules, in order to give a 75-year-old man his dying wish.

After doctors at Aarhus University Hospital told Carsten Flemming Hansen that he was too sick for surgery and would die within days from internal bleeding following an aortic aneurysm, he revealed the final thing he wanted to do.

And that was to smoke a cigarette and drink a glass of cold white wine outside, while watching the sun set.

According to a post on the hospital’s Facebook account, nurses wheeled Hansen out onto a balcony on a bed last Tuesday and broke the building’s strict no-smoking policy by allowing him to light up.

He then enjoyed a spectacular sunset as he sipped his drink, surrounded by close family and friends.

“It was a very cozy and relaxed atmosphere,” said one of the nurses, Rikke Kvist. “Of course they were relatives also affected by the fact that he was going to die, and they were sad.”

The hospital shared a photograph of Hansen online Friday, shortly after he died. It’s since gone viral, with many people praising the nurses’ compassionate deed.

When I became a new nurse many years ago. Visiting hours were strict for children. I would let the parents climb in a window from the promenade to be with their little ones My supervisor was behind me me and I caught a tirade of abuse. but I continue to let them sneak in. Many years later they decided having parents present was helpful to recovery. See I really was ahea of my time.
Graduated. From nursing school 1968.

Hospice nurses do these things every day. Of all they areas of nursing that I have worked, Hospice nursing offers the chance for the most compassion. If a patient is a veteran, he/she gets a veteran salute before he dies. Pet therapy, massage therapy are par for the course. Favorite meals if requested are made for the patient. If the patient requests beer or wine, the physicians are usually ok with it. Way to go Hospice.

We let the family of one hospice patient bring him beer in an unmarked cup. Another hospice patient’s family was allowed to bring the patient’s dog into the room so that the patient could say good by to their beloved pet. Management found out about both incidents and turned a blind eye in both cases.

Reminds me of the time a man was dying on my floor. Visiting hours were over and I was going through escorting visitors out. I came to the dying man’s room, i said, visiting hours are over. The elderly woman seated in the chair holding the man’s hand said to me, ” I am his wife, we have been married for over 50 years, this is going to be his last night on earth, may I stay with him?” My response, ” Ms, you may stay with your husband for as long as you like. If you need anything at… Read more »

Kudos to the Nurses taking care of this man. Bless you and your compassionate hearts! This is what Nursing is all about!!!!